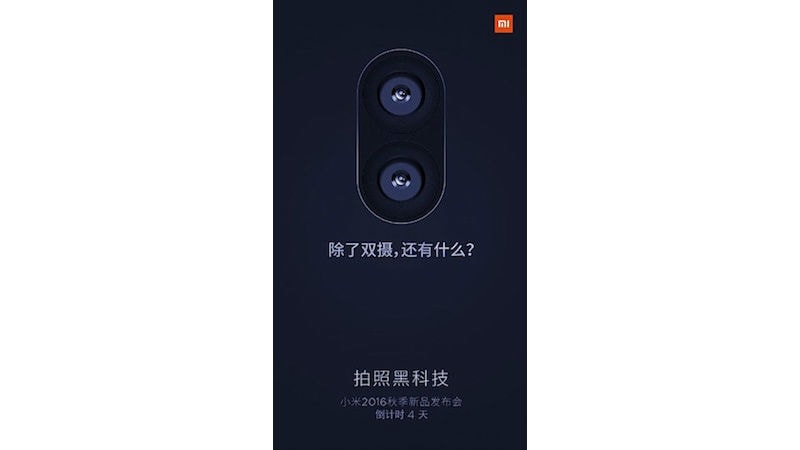 After teasing fans with a benchmark score for its upcoming ‘S’ handset, Xiaomi has released another teaser, this time focusing on the camera. From the looks of it, the smartphone expected to be launched on September 27 – thought to be the Mi 5s or Mi Note S – is likely to come with a dual rear camera setup. This is in line with reports from July that leaked alleged renders of the Mi 5s with a dual camera setup.

However, while earlier renders showed the dual rear camera module horizontally placed on the top left corner, Xiaomi’s teaser shows that the dual camera setup is placed vertically and most likely around the centre of the handset.

Since the Mi 5s is touted as a beefed up version of the Mi 5, a dual camera module was expected from the Chinese manufacturer. Meanwhile, recent rumours tipped a 16-megapixel rear camera and a 4-megapixel front camera for the Mi 5s.

Along with the dual camera setup, the Mi 5s is expected to be powered by a 64-bit Snapdragon 821 quad-core processor with Adreno 530 GPU paired with 6GB of RAM. The inbuilt storage option is expected to be at 256GB and the device is pegged to run on Android 6.0 Marshmallow with MIUI 8 on top.

Xiaomi’s latest teaser, however, raises more questions than answers. Latest rumour going around is that the company will not unveil a Mi 5s, but rather a Mi Note S. This begs to to question whether the latest teaser from Xiaomi is related to the Mi 5s or the Mi Note S, or some other device entirely.

Xiaomi is expected to unveil a slew of devices which include a smaller 4-inch variant of the Mi 5s, a Mi 5s Plus and Mi Note 2 on September 27. We’ll know in a few days which of the devices become a reality.