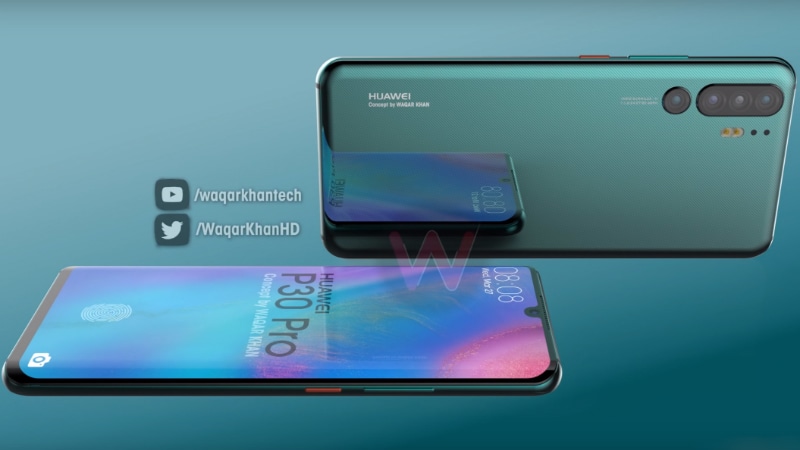 Huawei P30 Pro could soon debut as a part of the new P30 series that should include the regular P30 as well. But ahead of any official confirmation, the new flagship now has concept render video published on YouTube, thank to numerous leaks. The Huawei P30 Pro concept featured in the nearly three-minute video shows thin bezels and a waterdrop-style display notch. The smartphone also appears to have curved edges, similar to the Huawei P20 Pro. The back side of the Huawei P30 Pro is expected to sport a quad camera setup that is clearly highlighted in the render video. The video also shows a mix of gradient and solid colour options of the upcoming model.

The video released by YouTuber Waqar Khan on YouTube shows the Huawei P30 Pro concept based on all the recent leaks and rumours. It shows the smartphone with narrow bezels and a thin chin. This means the smartphone could have a high screen-to-body ratio. On the top, there is a waterdrop-style display notch that includes a selfie camera.

The back of the Huawei P30 Pro is already rumoured to sport a quad camera setup. The latest video shows the new camera setup that has three camera sensors in a vertically-placed sequence and a separate sensor just below the triple camera setup. There is also an LED flash module that seems to have two LED flashlights.

The concept render video also suggests that the Huawei P30 Pro will come with an in-display fingerprint sensor. Further, the power/ lock button and volume rocker are placed at the right.

Huawei’s branding is visible at the back of the P30 Pro. The concept render video also suggests that the smartphone will have gradient as well as solid colour options.

The Huawei P30 Pro is rumoured to have a primary, 38-megapixel Sony IMX607 sensor that will be powered by Exmor RS image processor. The smartphone is also rumoured to come with a curved OLED panel.