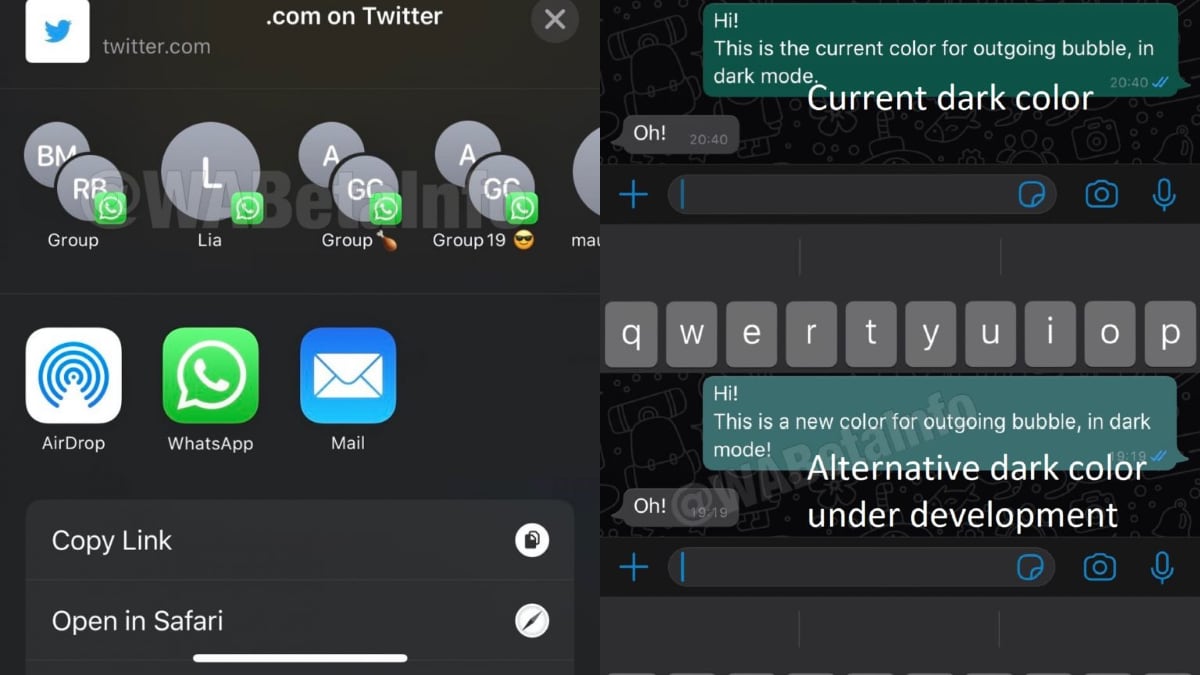 WhatsApp has released a new beta update for iPhone users and it brings improvements to the work-in-progress Contacts Shortcut feature. It also brings some general bug fixes and Voice Over improvements as well. The bubble colour inside WhatsApp chats has also been tweaked to a different green shade. WhatsApp for iPhone beta tweaks essentially hint at what’s coming in the future. The Facebook-owned app has been working on the ability to show contact shortcuts when in iPhone’s Share Sheet menu for a while now. It has popped up in past updates as well, and now the latest beta suggests that more users will be able to see it.

Popular WhatsApp features tracker WABetaInfo has published all of the new things that come with WhatsApp v2.20.80.22 beta for iPhone. With this update, a few more users are able to see contacts shortcuts in the iOS share sheet, after sending a message in a chat. The tracker says that it should work for users on iOS 13.6 beta. This feature shows small contact bubbles of frequent groups or people users share things with whenever you are trying to share something using iPhone’s Share Sheet. It was first spotted in WhatsApp v2.20.70.19 beta for iPhone last month, wherein only a handful of users got it. But now, with this latest WhatsApp v2.20.80.22 beta for iPhone update, more users should see it in their iPhone Share Sheet. Android users seem to have this feature since a long time now.

The tracker notes that the latest beta also syncs WhatsApp contacts shortcut icon in the share sheet. If a contact changes his profile picture, users should see the most updated one in the share sheet. Apart from this, WhatsApp v2.20.70.22 beta for iPhone also brings improved support for Voice Over, in particular when you archive and unarchive a chat. Lastly, the latest iPhone beta replaces the old green bubble colour with a newer green shade. The difference is subtle, but a hardcore user may be able to tell the difference. The tracker says the update also implements some general bug fixes that will be also included in the stable WhatsApp v2.20.80 for iPhone update.